Someone has linked my ethnography tag to answer someone else’s question on Yahoo! Answers whether anyone knows anything on ethnographer interference.

Quickly checking the reference I found two entries of mine tagged ‘ethnography’ in this blog and doubt they have helped much.  My as quickly thrown out literature recommendation  anyway would be Lorraine Daston on ‘The Culture of Scientific Objectivity’ and Max Weber on ‘Objectivity in Social Science’. 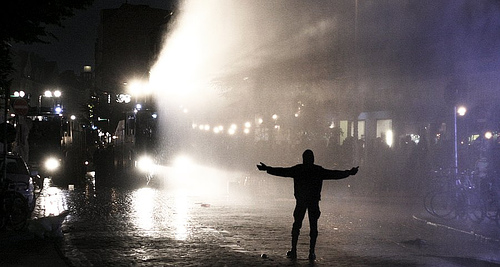 Tonight I went flickr. Spending time to get to know the different tools that come along with blogging labeled ‘social software’ and to get an idea of how it works in regards of the ‘social’ was overdue. Knowing people share pictures was not sufficient.

People share information, visually–and indymedia is represented on flickr by several tags. I was astonished though–and not again, having thought about it for a second–finding the bambule tag.  It’s not so much the representation of something that is far away that strikes me here, but the one that represents something that is close-by.